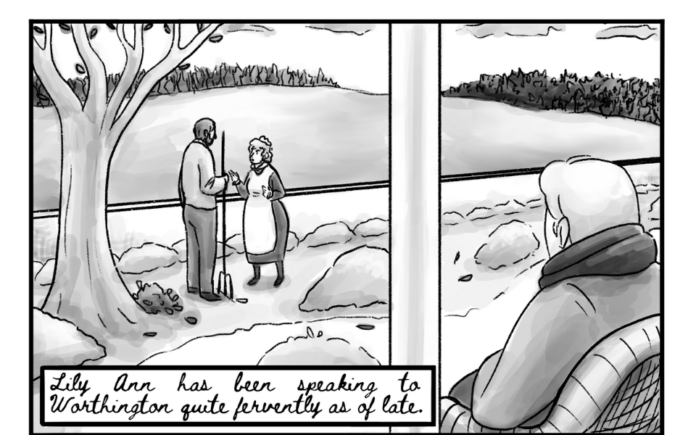 Julian Gray, Stories For Us will run from Saturday 19 March 2022 until Monday 2 May 2022 and is part of The Lowry’s EDITS Series.

The exhibition will bring together a range of work by Manchester based illustrator and comic creator Julian Gray. As a queer, trans, disabled and mixed race artist, Julian is passionate about filling the world with stories featuring marginalized characters that focus on more than just their hardships.

Gray’s comics explore tales with protagonists such as trans knights and disabled aristocrats. The exhibition will display comics including Witch & Warrior, a Sapphic medieval fantasy, and The Invalid’s Valet, a queer Victorian romance. Accompanying these comics, will be a number of development sketches and timelapses demonstrating Julian’s draftsmanship and approach to character designs. The exhibition will also highlight a number of comics and graphic novels that have influenced Julian’s work, which include references to film noir, 80s comic art, and other queer creators.

At the heart of the exhibition will be an opportunity for visitors to engage with the process of comic making through drawing and writing. Visitors are invited to display their finished creations in the gallery space, contributing to an evolving, collective response to Stories For Us.

“I create my comics and the stories within not just for myself, but also for people like me, people who don’t see themselves reflected in the media around us. I want this exhibition to carry that message; I want it to be a space that encourages everyone to discuss and reflect on what stories get told in fiction, especially mainstream comics and comic adaptations.”

“Julian’s moving work platforms central characters who aren’t generally represented in mainstream comic culture, enabling stories to be told through the lens of different voices. By bringing Stories For Us into the gallery, we welcome visitors to explore Julian’s fantasy tales and feel inspired to share their own experiences through the medium of comic making.”

Julian Gray, Stories For Us

Stories For Us is an exhibition centered on work by Manchester based illustrator, Julian Gray, who champions authentic representations of marginalized groups in his comics.

‘They were transforming their countries’: South Asian architecture after British rule | Architecture