Skating and ice rinks combine temperature, atmosphere and structure together. Between sports and leisure, these spaces are designed around experience and time as some of the most interactive public spaces. As an architecture of recreation and play, skating centers also host a variety of sports. Today, the architecture of skating encompasses a range of programs and formal approaches that define some of the most iconic and social activities. 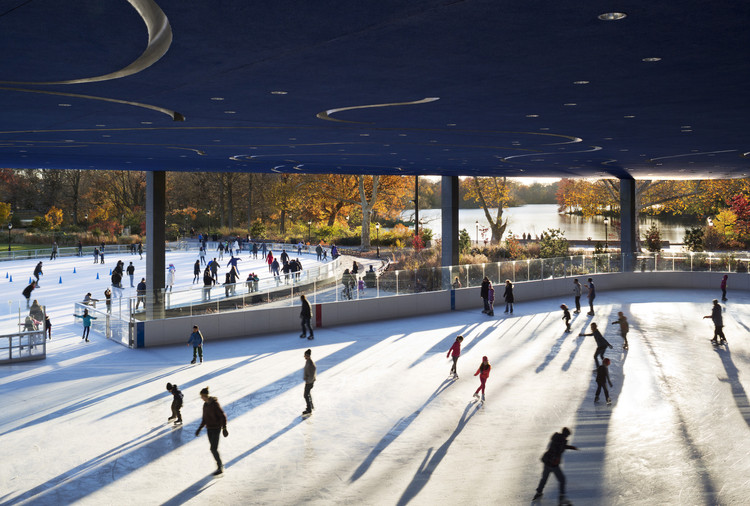 Across the world, famous ice rinks from the Rideau Canal to Rockefeller Center provide places for people to skate and come together. Artificial rinks trace their roots back to the “rink mania” of the 1840s and the world’s first mechanically frozen ice rink, the Glaciarium. The following spaces combine areas for skating and sports with room for spectating and gatherings across a range of climates and countries. Together, they show how architects and designers are rethinking skating venues as a means to engage civic, natural and urban conditions.

The functional layout and design of this ice sports center is mainly based on the rational organization of events and the environment space. It’s form was made to provide athletes and citizens with diverse activity spaces: two main entrances provided on the north and south sides of the base, three main venues, ie the speed skating gym, the ice hockey hall and the curling hall arranged close to the entrance to facilitate event organization and people evacuation. In addition, there is the athlete apartment and the media center, etc. that provide service for sport events arranged on the side far from the city road, and the three venues and the medium center showing a ring-shaped layout, like a snow lotus in blossom.

The Wukesong Ice Sports Center is the Ice Hockey Training Center for the 2022 Winter Olympic Games. It’s located at the southeast corner of Wukesong Sports Complex, right close to Changan Street. The project is symmetric with the Basketball Court on the west. The project consists of two levels above the ground and two levels underground. Functions underground are designed as the ice arena with a capacity of 1900 audiences and related functions surrounding the arena, and other spaces are placed underground for sports culture and a capacity of 900 audiences.

The skating rink by the sea in the Sevkabel space port is a small temporary seasonal project within the large-scale transformation of the territory of the historic Sevkabel manufactory (Siemens & Halske), located on Vasilyevsky Island. The structure of the rink derives from seaside location as well as from the industrial context. The almost rectangular ice field is tightly fit between the fence and the existing industrial building. In the center of the rink there are preserved trees that form a small round island that naturally divides ice into several zones.

At the root of the project: a round, fluid and generous shape, as a metaphor of a universe of ice. As its construction progressed: a sea monster, a whale covered with 200,000 aluminum scales. The new ice rink of Liège is embedded into a crevice of the Médiacité, private real estate development project which came to redevelop a former industrial site on the right bank of the Meuse. It inherits several constraints that it clarifies in an autonomous and unitary form, until incorporating the access to the mall’s car park: the whale’s head.

The new ice skating center is located right in the middle of the sport – and recreation area of ​​the Waldau in Stuttgart, Germany. The project developed in some steps. As there has been an unclosed ice skating complex closed to a small building for technic now it isdeveloped to a big covered ice skating hall and a smaller closed and ventilated ice skating hall with a service building in between.

Spearheaded by the Prospect Park Alliance and the New York City Department of Parks and Recreation, the LeFrak Center at Lakeside is a 75,000-square-foot, year-round skating and recreational facility that will open in December. With programming including winter ice skating, summer roller skating and a warm-weather water feature, combined with a restored landscape and vastly improved park access, the LeFrak Center at Lakeside aimed to be an extraordinary new destination for the Brooklyn community, New Yorkers, and visitors alike.

The Latest Intel About Gary Harris

Why “Yuri!!! On Ice” Has My Favorite Anime Plot Twist